UPDATES
My Year Without Sex would love to hear your comments and opinions - let me know what you think or how you relate.
Also, please let others know about this blog - share on Twitter, Facebook, your blog, email to your grandma - let's spread the word.
Thanks for joining me on this journey!

MONTH #4 - MARKING IT DOWN TO LEARNING

The past few weeks have been centred on the idea of moving forward from past heartache in my life and fully accepting this new world of alone.  I wrote in “Facing the Void” about saying goodbye to The Ex in a letter and honestly facing life after that relationship… well, that was all well and good, but it didn’t stop me from obsessing about it.  This past weekend it dawned on me why.  I wrote a letter saying goodbye, read it into the air and burned it.  Yes, a ritual, like my therapist recommends, but the wrong ritual.  I spent years writing letters to him that he never read (at least not until we broke up).  This wasn’t really any different and did not offer the closure that I sorely needed.  But there was one thing that could… 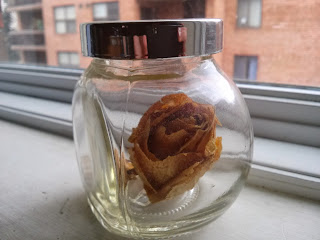 My rose.  This rose was given to me on the first Valentine ’s Day that I spent with The Ex.  He had been so sweet about it.  I was super stressed at school and couldn’t even think of doing something special on that day and he suggested just staying in and ordering Chinese food, which was one of the best ideas he could have had (he was full of great ideas back then).  This became out Valentine’s tradition for the rest of our relationship.  It was also the first time I had received a rose from a boy.  Being the hopeless romantic, I had always said that I would marry the first man who gave me a rose, so you can imagine the significance of this flower for my 20-year-old self.  I was so careful to dry it and find the perfect jar to preserve it in.  It had to be perfect since I was going to give it to my daughter on her wedding day and she would give it to her daughter and so on until the end of time (oh, the fantasies of our youth!).

Well, as you can clearly see, I had kept this rose in perfect condition for nearly 12 years.  It was one of my most treasured possessions.  This was my last vestige of “maybe” for that relationship and when it sprung into mind, I knew that in order to move forward, I had to let it go.

My therapist often talks about the potential danger of hope.  Holding on to hope in a hopeless situation becomes damaging to your soul.  This is one of those situations.  No matter how far forward I moved, there was this “hope” that tied me to the past, preventing me from truly moving on – destructive.  This is not dismissing hope altogether, but much like wishes, you must be careful about what you hope for.  It was time for hope to die.

So, once again, I put on my boots, mittens, toque and walked down to the river and stood on an icy rock in the middle of the stream and opened the jar that had been sealed for over a decade.  At this point it would be prudent to point out that Beauty and the Beast is my favourite of the Disney fairy tales and the significance of the rose under glass was not lost on me.  But much like that story, I could not continue until the spell on the flower was broken.

As I put my hand into the jar to pull out the flower it disintegrated in my hand.  I pulled the remnants of the petals out and the wind carried them off before I could perform my “ritual” of saying goodbye.  They floated off into the river and before I knew what was happening my cherished rose was drifting away.  And that was that.  I followed the petals as far as I could until they disappeared into the storm drain; back to rejoin the soil of the earth and grow into something new, much like myself. 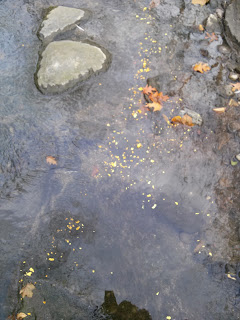 And that was the end of The Ex.

It broke my heart and I don’t think the Little Girl has fully recovered from the shock, but she will.  It was a few days after that it really sunk in; I looked around as if seeing my life for the first time.  It wasn’t bad.  It was quite good. And for the first time in a long time, I was at peace.

Like many of the moments in this process, music has soothed me.  Recently, the song Bed of Lies by Matchbox 20 has been the most poignant; particularly the last line of the chorus:

No I would not sleep in this bed of lies
So toss me out and turn in
And there'll be no rest for these tired eyes
I'm marking it down to learning
(Check out the full lyrics here.  It describes my feelings at the time of the break-up pretty accurately.)

That is really what all our ended relationships come down to: learning.  This is the spirit I walk forward with - all the men who have influenced my romantic life have given me something in the way of a love lesson.  So, I would like to honour those men for the things they taught me about myself and what I want in life (I didn’t necessarily date all of them):

The Ex
(being the most significant relationship I ever had, it feels like this is the place my education started)
What I Learned:  Brains and humour trump nearly anything.  I need someone who challenges me intellectually but who can still make me laugh (all the time).  Dr. Seuss has a quote: “We are all a little weird and life is a little weird, and when we find someone whose weirdness is compatible with ours, we join up with them and fall in mutual weirdness and call it love.”  He was weird like me in a way I had never experienced before.
What I Want:  Someone who is passionate about life.  Who dreams and takes action to make those dreams come true.
Favourite Trait:  When it was just the two of us, he would wave his arms over his head while doing a silly voice and do a little jig over to me when making a point, then give me kiss.  It's a little hard to explain, but it always made me smile.

The One That Got Away
What I Learned:  There are those people that can know what you are feeling without you having to explain.  They can tell by your face and the way you behave.  They pay attention to you and know when something is out of sorts.
What I Want:  Someone who is completely head-over-heels crazy about me, but can still be his own person.  Someone who can be comforting when needed, but also put me in my place when I’m overreacting (and knows the difference).
Favourite Trait:  He would always offer me water after a run or pick up my favourite flavour of Gatorade before we went.

Mr. Greek
(I may not have mentioned him before, but we dated after The Ex)
What I Learned:  I need a man who takes control; who is confident making decisions.  Who can be vulnerable and intimate without feeling any less masculine and make me feel protected when I need to be vulnerable.
What I Want:  Someone who trusts me when I’m doing my own thing and doesn’t need constant affirmation.
Favourite Trait:  When he would order in a restaurant for both of us.

Kryptonite
What I Learned:  The super wonderful, nice, intelligent, funny, attractive, well-rounded amazing guy does exist and can still be single, even in your 30s.
What I Want:  Someone who is ready to make a commitment.
Favourite Trait: I already mentioned this in a previous post, but brushing our teeth together before bed.

Ace
What I Learned:  There are all kinds of weird-like-me guys in the world and they are all completely weird-like-me in different ways.
What I Want:  Someone who loves the absolutely crap out of me and can’t imagine being with anyone else for the rest of their life.
Favourite Trait: Random impromptu road trips (which may result in getting caught whispering late at night while sleeping in bunk beds).

Prince Charming
What I Learned:  When a man is interested, he shows it and he will do whatever he can to find you.
What I Want: Someone who takes the time to get to know the real me.
Favourite Trait: When he held me as I was shying away, not letting go until I was relaxed.

Now, by no means are these the only men who have had an impact on my life, but they are the ones that have had the most impact on what I want in a potential partner and who have shaped my ideas of what is possible.

At this point, I’ve become more hopeful than I have ever been in the past about the possibility of finding what I want in a relationship.  I’m finally slowing down and taking inventory of the wonderful things in my life and appreciating the time I have alone.  I’ve always referred to my apartment as my sanctuary, but now I am able to fully take in what that means: it is temporal and this time I have to be completely alone is precious.  It may not always be this way, eventually I may need to let someone else in again and at that point, this will all change.  For the first time in my life I feel calm and content.  I’m looking forward to the next 8 months and really spending some quality time with myself – alone! (Gasp!  Really? – unpredicted!!)
Posted by Art Thief at 20:20

Email ThisBlogThis!Share to TwitterShare to FacebookShare to Pinterest
Labels: The Data, The Experiment